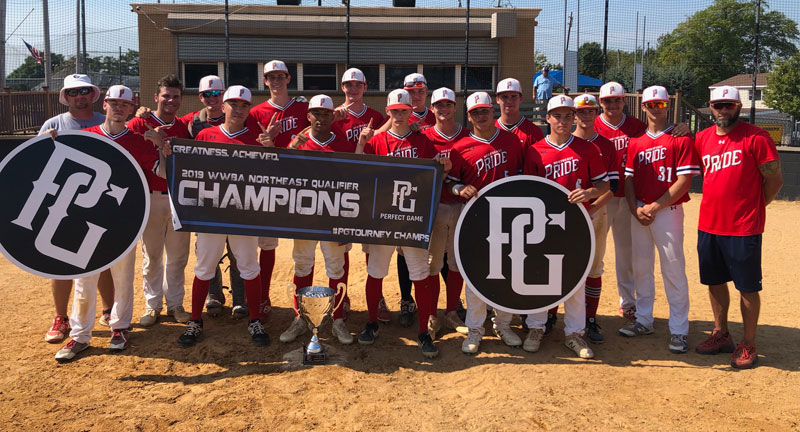 STATEN ISLAND, N.Y. – A second inning grand slam by Eric Yost (2020, Ossining, N.Y.) opened up a 4-0 lead for Northeast Pride Scout Team in the championship game of the Northeast Qualifier, and proved to be all it needed on its way to a 8-0 run-rule victory over Team BEAST.

The win for the team gives them an automatic bid to Jupiter, Florida for the WWBA World Championship in October.

“Beyond [excited],” head coach Joe Curreri said after the game. “It’s the first time we get to do this. It’s a great feeling. The boys played well this weekend.”

Northeast Pride Scout Team tagged on three more runs in the bottom of the second inning to push the lead to 7-0. After the Yost home run, Devin Boone (2020, Warwick, N.Y.) and Evan Dempsey (2020, Clarks Summit, Penn.) started things up again with a pair of singles, and later scored. Tyler Pugliese (2021, Yorktown Heights, N.Y.) brought home two more with a single to end the scoring in the second inning.

Pugliese hit another RBI single in the bottom of the fourth inning which proved to be the run-rule clinching score.

It was ultimately Yost’s day, though. On top of his second inning grand slam, he threw all five innings for Northeast Pride Scout Team, allowing only four hits while striking out four and only needing 65 pitches to do it.

For his efforts, Yost was named MVP of the tournament. In total, he collected six hits, five runs, and eight RBI on top of his title game performance on the mound.

Channing Austin (2020, Brooklyn, N.Y.) of Team BEAST was named the MV-Pitcher of the tournament after throwing a gem in the second round of bracket play. On its way to a 11-1 victory over Baseball Performance Center, Team BEAST got six full innings out of Austin, giving up no runs on two hits and six strikeouts.

Team BEAST took that performance and moved all the way to the championship, but was outlasted by Yost and Northeast Pride Scout Team.

Now it’s time to prepare for the WWBA World Championship, and Curreri thinks his team is set up to make a splash in Jupiter.

“I think we’ll compete pretty well,” he said. “We have a bunch of arms, as we showed this week. In five games, I think we gave up a total of seven or eight hits total. So I think we’ll fit in. It’s definitely big-time competition, so we’re excited for the opportunity.”