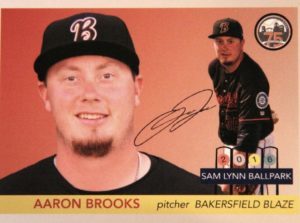 Aaron Brooks comes to us after a six year stint in professional baseball with the Seattle Mariners organization. Brooks, who hails from Mountlake Terrace, Washington was drafted in the 26th round but he quickly progressed through the Mariners organization. He made his mark initially by setting a rookie saves record for the short-season Mariners summer League team with 12 saves, a record which still stands. He advanced to the Everett Aquasox, a short season Class A team. At Everett, Brooks earned an All-Star selection which was even more special since Everett is just a few miles from where Aaron grew up and went to high school. Brooks continually moved up the Seattle chain as a reliever with a mid-90's fastball. He played for the Clinton Lumberkings in full season Class A ball. From there Brooks toed the rubber as a reliever with the Bakersfield Blaze in the California League. The AA Jackson Generals found themselves in the middle of a battle for a championship during the 2016 season, so Brooks was summoned to the Southern League team and Aaron and his teammates were able to capture the championship trophy.